Yes, I put silk in the washing machine … and the dryer, too!

While it was in there, I decided to Google whether that was an OK idea. And the Magic 8 Ball that is the Internet came back with “Outlook not so good.” Yikes!

I ran to the dryer to pull out the silk, but it was already dry and about to enter the cool-down cycle. And it was intact. No visible heat damage or pulls or streaks of white as warned.

In fact, the silk was a lot softer than when it went in. It was a little stiff and crinkly and — dare I say it — polyester-ish when it went in. I don’t know if the improvement is due just to the washing, as some say, or the inappropriate application of heat as well.

Regardless, the silk has a nicer hand now.

Washing silk in the machine really should involve a lingerie bag and NO HEAT. I’ll stick to the rules next time, but this time I came out aces. And my blouse when it’s done can go in the washing machine, handwash cycle. Lucky me!

8 thoughts on “Yes, I put silk in the washing machine … and the dryer, too!” 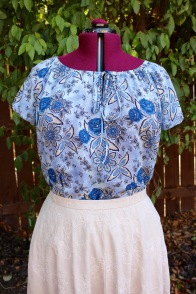